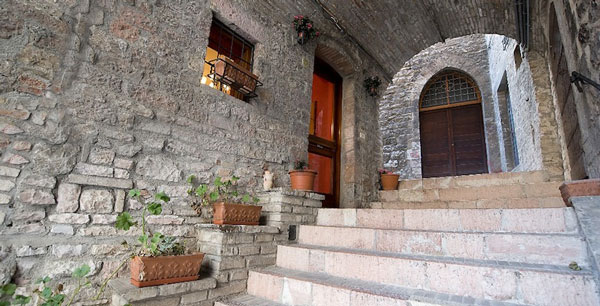 Looking into historical hearsay the hotel get his name from this famous poet.

This building was Cinzia house, here Properzio had his first love story with Licinna the Cinzia slave. In 29 b.C. ended the love with Licinna and began an  overwhelming passion for Cinzia, mistress of Licinna.

The love and passion of Properzio were not shared by Cinzia that for years betrayed  Properzio with other loves, their relation ended definitively five years later.

Properzio was born in Assisi in 50 b.C., as wrote in his “Elegia Proemiale” of IV book, and reading the P.Passennus epigraphy parents.

Some archaeologists claimed to have found the poet house down Santa Maria Maggiore Church, a luxurious villa with Greek mythological frescoes.

The villa was confiscated by Augusto in 41-40 b.C., in this period the poet had a lot of bereavements and land confiscations. He became poor and moved to Rome, where tried to start political and law career.

He received immediately successful as a poet, his poems also influenced the lyric of the time and in future.

During the 700 the Neoclassical period, with Ariosto, Tasso, Pierre de Ronsand, he became famous and important, the most celebrity arrived during Goethe cooperation.

Properzio had important friendships like Mecenate, Virgilio, Ovidio. He had a short life (like Catullo end Tibullo). He died probably at 35 years hold about 16 b.C.